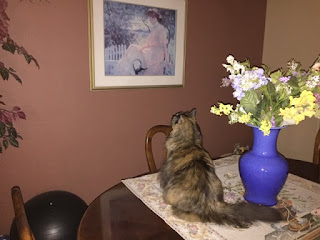 Tuna Casserole...Okay, I'm procrastinating.  I said I would make it today.  I just have to get my courage up.  How hard can it be?

I got off to a bad start when I went to Ralph's and Gelson's to get the ingredients.  Ralph's was out of whipping cream, so I had to go to Gelson's.  Then, when I got home and was getting out of the car, my purse bumped into my Starbucks mocha in the cup holder and knocked it enough so the top flew off and coffee splashed around the interior of my car, and all over the new pair of white jeans I'd never worn until today.  I haven't had good luck with white jeans.  It seems they're a canvas for things of color...coffee, mustard, ketchup.  Nothing as unobtrusive as white wine...

Chopping some onions.  My mom used to be a master chopper.  Her onions and tomatoes came out so uniform and tiny.  I watched her a few times, but that skill is above my pay grade.  I also watch "Worst Cooks in America" and have seen Ann Burrell explain onion chopping numerous times, but of course none of it sticks so I did my best with my limited skills.  I had a strange onion.  I bought it several months ago when I was previously contemplating making tuna casserole.  I was hoping it was still good.  I sliced into it and there was a brown layer inside that looked just like the outer brown layer.  I couldn't let that deter me, however, so I picked out the outer layer and the brown layer (and the inner parts that had some green in them) and used the rest.  I trust everything will turn out just fine.

I have one good kitchen skill.  I clean everything as I use it, whether it's a spoon, a cutting board, a colander, a bowl.  I at least rinse it and put it in the dishwasher, so when I put my casserole in the oven there is no mess in the kitchen.  I've always done this, even when I'm throwing together a quesadilla.  I value the no-mess aesthetic.

I'm done!  I don't know how it will taste.  I didn't use the San Francisco a la Carte recipe.  Too much celery.  I found a broccoli rice casserole recipe and I found a Palmini tuna casserole recipe that I'd scribbled a while ago when I had the brilliant idea that if I used Palmini (strips of hearts of palm) instead of pasta it would be healthy.  Unfortunately, I wrote down all the ingredients but didn't write down any of the instructions.  I ended up using the broccoli rice instructions.  I added some broccoli to my casserole and stuck it in the oven.  Now we wait...

So, it's out of the oven.  After 25 minutes, I sprinkled on some cheddar cheese.  Just a little.  I'd wanted to add breadcrumbs but forgot to buy any so I had to improvise.  First, I'd stuck a slice of bread in the oven before the casserole went it, hoping it would dry out enough to use, but it didn't.  So I was left with crumbling up garlic and Romano croutons to sprinkle on top.  They don't sprinkle as easily as you might think.  I didn't crumble them in advance, so was left with trying to crunch them up with my hands over the casserole.  Not the best solution, and I ended up with some almost crouton-sized croutons on top.  Oh, well.  It is what it is.

It's not dinnertime yet, so can't give a review on it.  That will have to wait for next time.

Popular posts from this blog 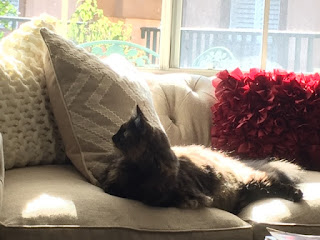 Hi.  That's Allie lounging in the sun.   I'm Pam.  I'm an author who's decided to learn to cook.  Not that I can't cook.  I microwave well!  I make salads!  I order online... Working from home, I have a lot more time to try new things. One thing I want to master is cooking.  For years, I've collected cookbooks and torn recipes out of magazines and printed recipes from the internet.  I have a TON of them shouting "Me! Me!," all trying to get my attention. I'm going to start with simple dishes.  I'm a lover of tuna noodle casseroles.  I can see a lot of frowns out there from people who either think it's an unhealthy choice or people who think it's too easy.  Mainly, I haven't had a tuna noodle casserole in a really long time and I miss it.  I thought I had a recipe tucked away somewhere that I've actually used in the past...the long ago past, but when I tried to find it I had no luck.  So, I've been searching for other recipe
Read more
February 24, 2021 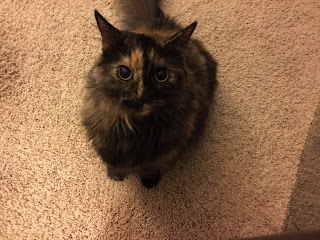 Allie thinks I'm invading her privacy.  That's her I'm not happy look. The tuna casserole was a success (even if it looks creepy in the picture).  My sister Sheila came over to try it.  She thought it was good but seemed more like a pasta dish than a casserole.  I forgot that I meant to add green chilis until I was in the middle of putting it together, but that can of green chilis I thought I had turned out to be nonexistent.  Maybe next time I'll make a list before I go to the market.  Maybe next time I'll put in jalapenos, too. Here are the casserole and the iffy Palmini recipe: And, in case you were wondering, here's a picture of my odd onion.  It's creepy, too.  Don't worry...I threw it away. I've already found my next cooking project.  It's from The Oaks, a spa in Ojai, so it should be super healthy (at least that's what I'm telling myself), only 180 calories.  It's called "Artichoke Chili Stuffed Potato." It's k
Read more